The usual rocky track that reduces speed because you have to look where you are putting your feet.

Thought from hard rock it was all down hill but no asteep little climb then downto the road and into Duncannon. My intention was to do my chores along the way and stay at Riverfront camping ground just out of town.

When I actually got into Duncannon I realised Id missed the post office opening times so would probably have to double back in the morning. 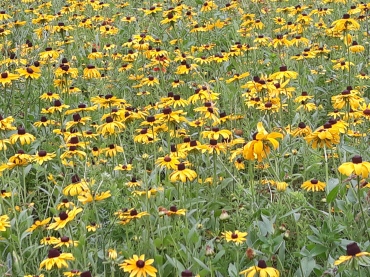 Got to the laundrymat and unpacked all my wet horrible gear. Put the washing on and sadly the Doyl Pup was just across the road. Settled in with some other hikers and who should appear but Dog Whisperer and Thumper. They intended to stay at the Doyle because it had a bad reputation as a dive. I decided to stay too as it would save me doubling back in the morning to the Post office.

The manageress when I booked in was horrified I had left all my stuff spewn out on the floor of the laundrymatt but it was in such a state someone would have been desparate to take it.

The Doyle lived up to its reputation, cracked windows and sheets for curtains extra but since few dared to stay there it was roomy and quiet. Couldnt bring myself to eat there though and a wise dissision as later on Fiti told us how she asked for a lime for her drink and was asked if she thought it was a bloody fruit shop.

I took myself along to the next pub and had a lovely meal with my two friends from Pen Mar Park. They were staying with Trail Angel Mary who lived above the pub and were getting ready to watch the entire Harry Potter Movie set.

View all posts by wwwgreenthumbs